The December 2018 opening of the Gaylord Rockies Resort and Convention Center was an exciting time for the Aurora, CO community. However, before ground was ever broken, years of planning were undertaken for this $800 Million project. 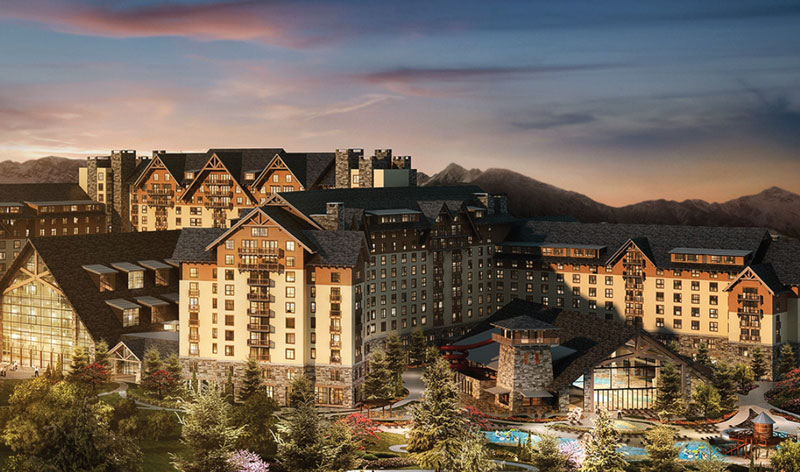 G.A. Braun, Inc. first became involved in the project in early 2015, closely working with General Construction Firms, Engineers, and Architects on the requirements needed for a laundry facility to support a resort that would feature more than 1,500 rooms, 4 restaurants, a convention center, and indoor and outdoor pools. As with most projects of this scale, there were many changes and revisions to the design, and Braun was able to answer the call at every turn.

After working on the design up front, Braun was awarded the contract for the entire laundry facility. This included a soiled sort monorail system, a clean side monorail system, a multi-conveyor uniform distribution system, valet equipment, a compressed air system - everything down to the trench covers and water fountains. “Not only was Braun an integral part of the planning process, they also took part in the competitive bidding process to Mortenson/Welbro during the buy-out phase of the project with the owner. Braun provided competitive costs that aligned with the laundry plan and helped value engineer the laundry to a budget that was acceptable to the owner” says Michael C. Renella, the Senior Project Manager with Mortenson/Welbro, who were responsible for construction.

Over the coming months, Braun’s Project Management Department worked with the engineering teams at the site to finalize the design. Given that the laundry facility was sharing space on the first floor of the two-story Convention Center, any available space was at a premium, and any errors could have major impacts on the overall convention center project. Utilizing Building Information Modeling (BIM), Braun was able to provide a three-dimensional computer simulation of the exact layout of the laundry. Integrating with the design team, this allowed for all utility routing to be accurately designed ahead of time, as well as prevent any conflicts in the design. 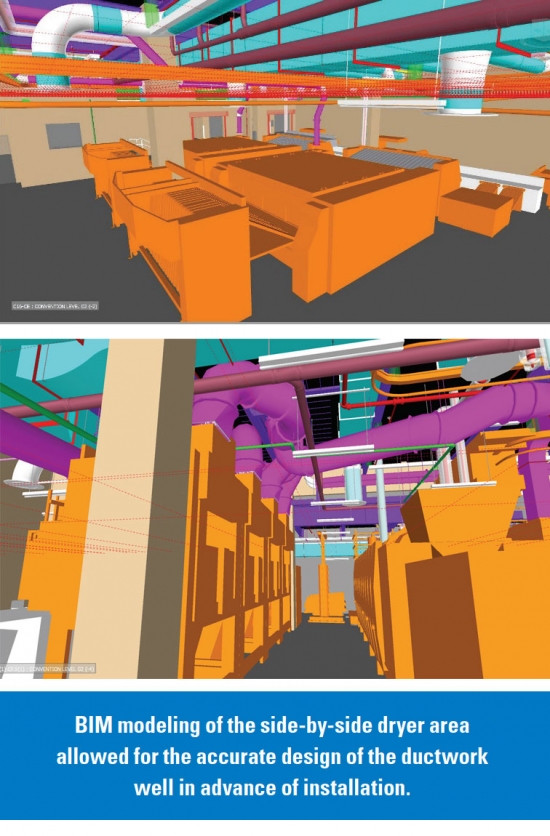 Braun continued to work closely with the construction team throughout the next phases of the project. For Braun, this was equipment installation. Careful coordination was also required for this phase, as the rigging of Braun’s Batch Tunnel Washer was required to occur prior to the construction of a particular wall in the convention center. Braun’s Project Management team planned and executed this complex rig without issue and completed the installation of all contracted equipment on time and within budget. 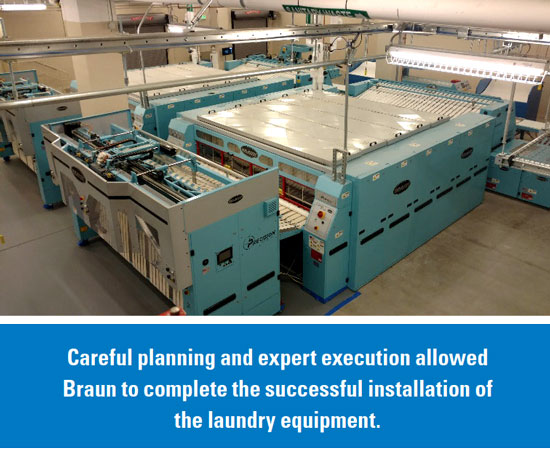 Over the course of the final year of the project, Braun assisted third party contractors (many of whom had never seen or worked on laundry equipment) with the remaining installation tasks by creating a detailed punch list and providing a continuously updated project timeline. Braun continued open lines of communication with the construction team, as well as the other contracted equipment providers, and maintained a coordinated, synchronized schedule. With the property having already booked 1.1 million room nights prior to opening, there could be no margin for error in the schedule. When the Convention Center was ready to obtain its Temporary Certificate of Occupancy, the Braun team was on site to facilitate the turnover to and training of the end users. “Braun worked closely with Mortenson/Welbro to establish a successful timeline of events for the laundry facility. With Braun’s assistance, our turnover of the laundry facility was a success with minimal punch list items,” says Renella. “Braun will be my first call for any future laundry needs.” - J. Risewick