CHICAGO — When Five Star Laundry started in 1999 by opening its plant here, it began building its hospitality linen business on the promise of producing high quality finished linen in a timely fashion for its clients. Today, while serving 30 hotels totaling 14,000 guest rooms in and around Chicagoland, upholding that promise has never been more important. 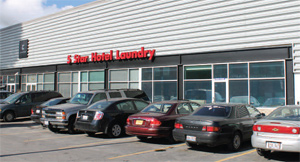 And so it was about a year ago when Five Star Laundry decided to invest approximately $5 million to bolster its plant automation and production capacity to meet the needs of the growing hospitality market in the Windy City.

The company’s operation exclusively handles customer-owned goods seven days a week, 24 hours a day. It processes a wide variety of rooms linen, from flat sheets to fitted duvet covers and decorative top sheets and everything in between. 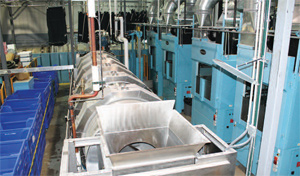 The newest Braun tunnel is seen here in the foreground. The original tunnel runs perpendicular behind it. (Photos: Bruce Beggs unless otherwise noted.)

These items are processed in traditional open-pocket washers for greater mechanical action and increased flexibility in wash formulas to remove food, oil and wine stains. To preserve the high-quality finish it provides, the company returns all processed round table linen and skirting on hangers. Where there is a hotel, there is, of course, almost always a generous supply of pool towels and other terry items. Towels and terry are processed by like items so washcloths and hand towels receive less drying time as opposed to the larger bath sheets. All items are folded and packaged per each hotel’s individual specifications. And while it is skilled at efficiently handling bulk items, Five Star Laundry also cleans a multitude of specialty items (blankets, mattress pads/covers, drapes and table skirting among them), dry cleans hotel employee uniforms, and provides same-day laundry and dry cleaning valet service for hotel guests.

The company—which also has plants serving the Orlando, Dallas and Washington, D.C., markets— purchases and uses virtually all of its process laundry equipment from G.A. Braun. Additionally, it uses only Ecolab products and services for its wash chemistry, plus it partners with Avendra for procurement, supply chain management and consulting services.

AHEAD OF THE CURVE

The company needed to increase its production capabilities beyond its existing tunnel and open pocket systems while improving material flow to facilitate gains in productivity and to reduce operating hours. In the fall of 2011, Five Star Laundry implemented a plan to automate the soil sortation, rail delivery and clean rail storage systems, provided by E-Tech, to free up space to add wash-room capacity.

This eliminated any tunnel system constraints due to manual processing and the need to have multiple, full-time staffers manage the movement of materials throughout the plant. 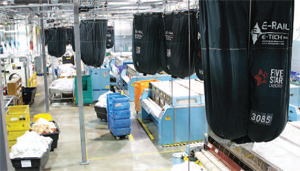 The addition of a rail system eliminated the need to manually move much of the material through the plant.

To complement the company’s existing 110-pound Braun tunnel system, it added a brand-new second tunnel—this one a 150-pound, 11-chamber Braun model. With this addition, Five Star was able to more than double its tunnel volume while gaining the ability to cut back to two shifts during peak season.

The project was timed to take advantage of lower occupancies at the hotels that Five Star Laundry serves. Renovation and installation work—which began in October 2011 and was completed in March 2012—was done between the hours of 8 a.m. and 4 p.m. daily so the laundry could maintain production the rest of the time. The company was able to meet its orders and did not have to send work out. 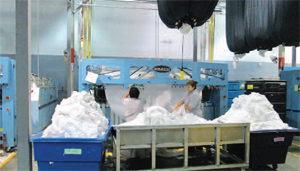 A portion of the clean rail system hangs above the flatwork finishing area. (Photo: G.A. Braun)

“The new Braun tunnel allows us a number of different advantages,” says a Five Star Laundry spokesman. “First, it’s a 150- pound tunnel as opposed to the original 110 pound unit that we have. So from that standpoint, the new tunnel gave us the ability to produce more linen in a similar period of time”.

The new wash aisle solution also allows for process redundancy in the event of a planned or unplanned outage, so clients can be confident that shipments will be on time. It has also reduced Five Star Laundry’s water and utilities usage, the company says.

The soil-sort conveyor and hoppers.

“It’s a competitive advantage,” says Alexandra Samis, Five Star Laundry’s director of sales in Chicago, of the improvements. “We certainly are the most modern, most technologically advanced. I think it puts us ahead of the curve for our competitive set here and also nationally.”

This marks the fifth large-scale project and the fourth Braun tunnel installed with Five Star Laundry, and the hospitality linen company plans to include Braun in its plans when considering future expansion opportunities. ALN