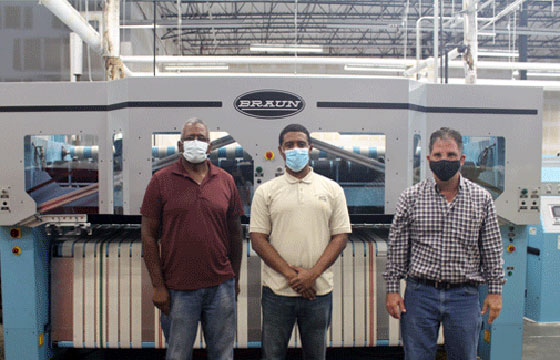 Hospitality laundry operators have struggled since the COVID-19 pandemic hit in March and slowed hotel bookings to a crawl. But many have seized the opportunity of a slowdown to prepare for a time when their prospects improve. Metro Laundry Service, a Washington, DC-area hotel launderer, recently collaborated with G.A. Braun Inc. on an upgrade of three sheet feeders aimed at doing just that.

Before COVID-19, Metro Laundry was growing rapidly. A second, 52,000-square-foot plant opened in 2018 with great fanfare as the business expanded. When the pandemic hit, business plummeted by as much as 95%, said COO Steven Young. The second plant, dubbed “MLS 2” was shuttered by early April. Operations were consolidated at the company’s original 24,000-square-foot plant in Capitol Heights. Among other down-time projects, discus-sions among the Metro managers and its executive team centered on making improvements to three Braun sheet feeders. The supplier company, based in Syracuse, NY, seized the opportunity to fine-tune its equipment. During the week of Sept. 28, it installed a newly upgraded feeder to replace one that Metro had. Young and his team are delighted with the revamped feeder and look for-ward to having the same upgrades applied to two other feeders. “Braun is a very valued partner of ours,” Young said. “They were part of the opening of that MLS 2 plant, and they wanted to be a part of helping MLS survive COVID and revitalizing the original plant. We’re very thankful to them for that.”

Mark Kirby, Braun’s director of finishing equipment technology, returned the compliment, thanking Metro for its collaborative input as a win-win for the company and its supplier. “Braun partnered with Metro Laundry to help define action items during the planning and development of Braun’s next generation of the Precision Series® Spreader/Feeder,” Kirby said. “Feedback and observations from Metro were well received by our engineering team. This collaboration produced positive results for all involved in the spreader/feeder upgrade.”

The Braun tech experts stayed at Metro through Sept. 30. Young said his team was pleased to have them explain the up-graded machine and provide on-site training in other areas. This was particularly helpful because as part of the consolidation of the two plants, older equipment at MLS 1 was phased out in favor of newer equipment moved from MLS 2, Young said. Most of the executive and engineering staff at MLS 1 had limited knowledge of the equipment from the other plant. The feeder installation gave them an opportunity to learn. “During that time that they were here, a stretch of about four days, was an opportunity for our maintenance and mechanics and engineering teams to pick their brains and learn as much about the equipment as possible,” Young said. Now as hotel business begins to pick up, fueled by Washington, DC-area events such as the recent Prayer and Black Lives Matter marches, Young is feeling optimistic that Metro will weather the storm of COVID-19 with a revitalized plant and staff. “We took this situation and tried to turn a negative into a positive and say, ‘Hey, let’s just use this as an opportunity to revitalize the plant,’” he said. “Revitalize it from an equipment standpoint and from a staffing standpoint.

Now we have more maintenance coverage and management than we had before, which has taken some pressure off all of us, so to speak. It allows us to operate better. There’s still a lot of challenges. We’re adjusting as we go along.”